The Friends of the Saint Paul Public Library announces Erica Spitzer Rasmussen as the winner of the 2018 Minnesota Book Artist Award for her work entitled The Love Affair.

Sponsored by Lerner Publishing Group, this annual award is presented as part of the Minnesota Book Awards with the Minnesota Center for Book Arts (MCBA), and recognizes a Minnesota book artist or book artist collaborative group for excellence of a new artistic work. Winners also demonstrated proficiency and quality in the book arts through three pieces of supporting previous work, as well as an ongoing commitment and significant contributions to Minnesota’s book arts community.
The Love Affair is a mixed-media sculptural book handcrafted from pieces of old family letters. Rasmussen was inspired to create the piece when she inherited two handmade wooden boxes filled with love letters exchanged between her maternal grandparents in the 1930s. She delicately cut the letters apart and interspersed them, binding them with a Coptic stitch. To retain the couple’s privacy, Rasmussen cut the pages small enough that significant content couldn’t be read by others. She then placed the book inside one of the wooden boxes crafted by her grandfather, in the twisted form of an infinity symbol, to suggest that the couple might continue their communion from life to death.

Members of the award committee praised the project as “playful, clever, and reverential in its reference to the art of love letters, 17th Century fashion, stitching, and symbolism.” Said one judge, “the classical essence in Rasmussen’s piece gives way to an avant-garde play on the notion of a book, with the written letters rendered inaccessible, untouchable and unreadable…and yet, the narrative, the history, and the intimacy are mysteriously palpable.”

Rasmussen is an artist who creates handmade paper garments, neckware and small editions of hand-bound books. She received her BFA and MFA at the University of Minnesota (Twin Cities), which included coursework in Mexico and Greece. Her current work explores issues of identity and corporeality. Rasmussen is a recipient of an Artist’s Assistance Fellowship (1999) and an Artist’s Initiative Grant (2015) from the Minnesota State Arts Board. Other professional highlights include a papermaking residency in Vienna, Austria (2010), a solo exhibition in Mexico City, Mexico (2012), and a bookbinding residency in Venice, Italy (2016). Her work has been featured in such publications as FiberArts magazine, Surface Design Journal, American Craft magazine, Hand Papermaking magazine, and the Huffington Post. Rasmussen teaches studio arts as a full professor at Metropolitan State University. Her artwork is exhibited and collected internationally.

A retrospective exhibition celebrating The Love Affair will be on display Feb. 1 to March 13 in the Cowles Literary Commons on the second floor of the Open Book building, 1011 Washington Avenue South, Minneapolis. A reception and artist presentation will take place, from 6 to 8 p.m Friday, March 9, at the Open Book building. The exhibit will remain open during the Meet the Finalists event for the Minnesota Book Awards, 6 p.m. Tuesday, March 13. Rasmussen will also receive special recognition and an award at the 30th annual Minnesota Book Awards Celebration on Saturday, April 21, at the InterContinental Hotel in downtown Saint Paul, sponsored by Education Minnesota. 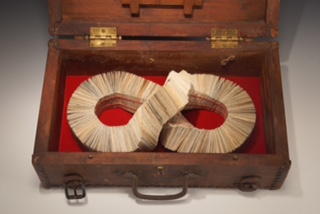 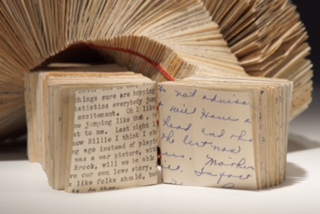