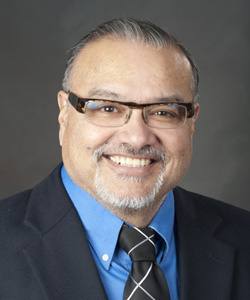 Eduardo Gutierrez, assistant director of Undergraduate Admissions and Chicano/Latino Liaison, has announced his retirement, after 32 years of service.

In his role within the Office of Admissions, Gutierrez has been instrumental in growing awareness of Metropolitan State University throughout the metro area. His work has led to growth in not only overall enrollment, but just as importantly, the growth of our Chicano/Latino student population. As his friend and colleague, Santos Martinez, has said about him, “Eduardo’s commitment in making higher education accessible to his community is not only his job, but it has been his mission.”

Julio Vargas-Essex, director of Admissions, who worked alongside Gutierrez, says, “I’ve had the opportunity to supervise Eduardo for the past five years, so I’ve observed firsthand his work ethic, skills and talent. Eduardo is not only dedicated and committed to his current role, he takes on the tasks associated with other roles to ensure his students are successful. On several occasions I have witnessed him going above and beyond his job description and does not hesitate to lend a helping hand to his students both inside and outside of the department. Eduardo genuinely cares for the work that he does and how it impacts staff, faculty, and students’ long-term success in both academics and career.”

Gutierrez departs Metropolitan State with the status of assistant director emeritus and vice president of the ASF Statewide Leadership Team. The university community is invited to join the celebration of Gutierrez’ career and retirement, from 4 to 6 p.m., Tuesday, Feb. 28, in the Founders Hall reception area, Saint Paul Campus.