Metropolitan State University will welcome two students from Japan who will attend the Saint Paul university as a cultural exchange, in a celebration that also commemorates the Nagasaki-Saint Paul Sister City Committee’s fifth anniversary of the Gift of Cherry Trees. 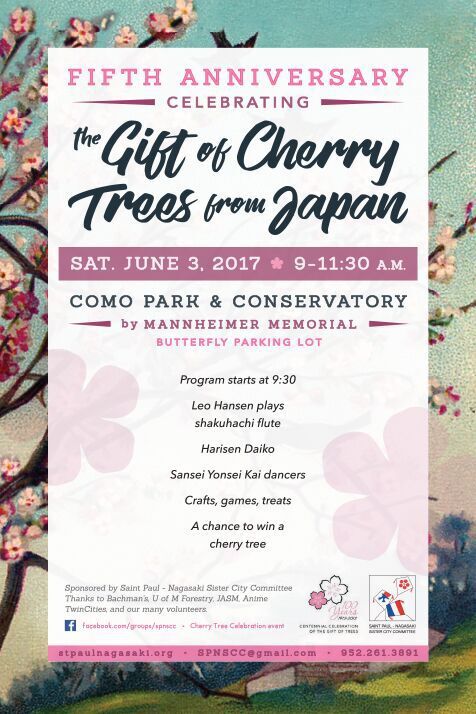 President Virginia “Ginny” Arthur will greet students Ayano Tsuchihashi and Yoshiki Ohgi coming from Nagasaki University to attend Metropolitan State in an inaugural exchange between the universities. A representative from the Japanese Consulate in Chicago will attend, as well as city officials. Special guests include Takayuki Miyanishi, president of the Nagasaki-Saint Paul Sister City Committee.

In 2012, the government of Japan donated 20 cherry trees to the City of Saint Paul as part of its Centennial Celebration of the Gift of Trees to Washington, DC. Saint Paul was one of 36 cities in the U.S. chosen to receive them in large part due to its having the oldest Sister City relationship with any city in Japan. The cherry trees line the steps up to the Mannheimer Memorial and form a semi-circle at the top of the hill. Additional trees are planted each year and the grove now numbers 30-plus trees.

The celebration is free and open to the public, and will begin at 9 a.m. Saturday, June 3, at Como Park by the Mannheimer Memorial. It is sponsored by the Saint Paul-Nagasaki Sister City Committee, with assistance from the Japan America Society of Minnesota, AnimeTwinCities, and many volunteers. The event will end by noon. Free parking is available. Entertainment will include performances of Harisen Daiko drumming, shakuhachi flute by Leo Hansen and Sansei Yonsei Kai dancers.

Saint Paul and Nagasaki became Sister Cities in December 1955. It is the oldest Sister City relationship between a U.S. and an Asian city. In 2015, the relationship celebrated 60 years with a gala year of exchanges and exhibitions. In 2015, Devinder Malhotra, then-interim president of Metropolitan State University, accompanied Saint Paul Mayor Chris Coleman’s official delegation to Nagasaki, which led to the exchange agreement between Metropolitan State and Nagasaki University. Tokens of esteem to Japan include two sculptures in the Nagasaki Peace Park, these cherry trees and the Japanese Garden at Como Park are living tributes from Japan to Saint Paul.