Anyone who’s ever watched a film by Lars von Trier, whether they’ve loved or hated it, or have been anywhere in between on the “feelings scale,” has witnessed something unique in the world of cinema.

Over the years, von Trier has been no stranger to controversy; nor has he been a stranger to accolades.  Whether you love or dislike his films and philosophy, when you come out the other side of one of his films, it’s safe to say it will stay with you longer than the average movie, which is all any filmmaker can hope to achieve. 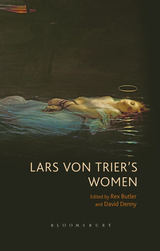 The book is edited by David Denny and Rex Butler, colleagues of Kunkle’s. Having a working relationship with both, and having written an article for The Zizek Dictionary, they knew she would be interested in contributing to a psychoanalytic book about von Trier’s films. Her article is called Female Fight Club: Lars von Trier’s Women and the Paradox of Being.

The Danish director Lars von Trier is undoubtedly one of the world’s most important and controversial filmmakers, and arguably so because of the depiction of women in his films. He has been criticized for subjecting his female characters to unacceptable levels of violence or reducing them to masochistic self-abnegation (Bess in “Breaking the Waves,” “She” in “Antichrist” and Joe in “Nymphomaniac.” At other times, it is the women in his films who are dominant or break out in violence, such as in his adaptation of Euripides’ “Medea,” the conclusion of “Dogville’ and perhaps throughout “Nymphomaniac.”

“Lars von Trier’s Women” confronts these dichotomies head on. Editors Rex Butler and David Denny do not take a position either for or against von Trier, but rather considers how both attitudes fall short of the real difficulty of his films, which may simply not conform to any kind of feminist or indeed anti-feminist politics as they are currently configured. Using Lacanian psychoanalysis and the work of Slavoj Žižek, “Lars von Trier’s Women” reveals hidden resources for a renewed “feminist” politics and social practice.

Kunkle earned her Ph.D. in political science from the University of Pittsburgh, with a specialization in Russia. Soon after graduating she became more interested in philosophy and started teaching at Vermont College in a program much like Metropolitan State’s individualized studies. She has been a faculty member at Metropolitan since 2008 and teaches Interdisciplinary Studies and Perspectives Educational Planning.

Kunkle’s main influences in the field of psychoanalysis are Jacques Lacan, Slavoj Zizek and Todd McGowan.