In the state of Minnesota there are 11 sovereign American Indian nations comprised of seven Ojibwe (Chippewa, Anishinaabe) federally recognized reservations, and four Sioux (Dakota) communities. A reservation is land which was retained by American Indians after having ceded large portions of it to the United States government via treaty agreements. Most reservations were created by treaties, but some were created through executive order or by other agreements.

Each Ojibwe reservation was initially established via treaty, and six of the seven reservations were subjected to the Dawes Act of 1887 (also known as the General Allotment act), meaning that the land was subjected to private ownership. The Red Lake reservation maintained its status as closed, which means that all of the land there still legally belongs to all of the tribal members collectively.

The four Sioux communities were originally all one reservation recognized by treaty which spanned 10-miles on each side of the Minnesota River. However, after the US-Dakota Conflict of 1862 Congress rescinded all treaties made with the Sioux, and subsequently people were forced from their homes. The communities as they exist now are small fragments of the original reservation, and were restored to the Sioux in 1886.

Located in northern Minnesota just south of the Canadian border within the counties of Saint Louis and Koochiching, Bois Forte—or strong wood—was named by French fur traders for the dense forests populating the area. The tribal headquarters are located in Nett Lake.

The Bois Forte Band of Ojibwe did not originate here, they journeyed from the east along the Saint Lawrence River and followed it inland. The reservation here was created when, in 1854, the American Indians in northern Minnesota ceded land spanning the entire northern portion of the state and were then told to select reservation lands within the vicinity of Lake Vermillion, which was near the heart of their community, but they retained the right to hunt and fish within the ceded territories. When word began to travel that there was gold beneath the reservation at Bois Forte near Lake Vermillion, the Treaty of 1866 relinquished much of the reservation claims and left the Ojibwe with 100,000 acres at Nett Lake. 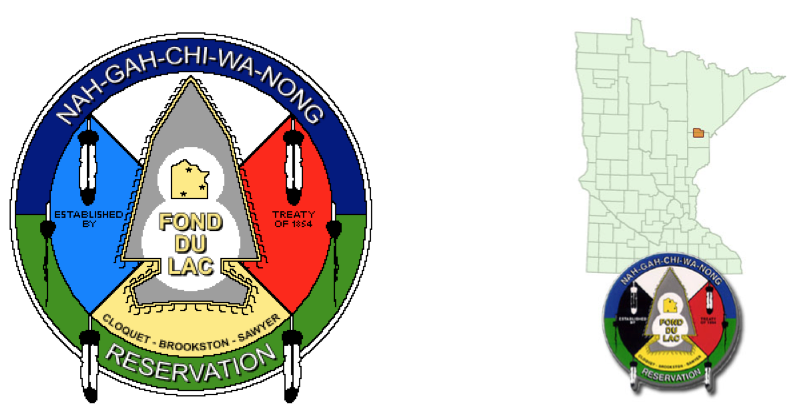 Fond du Lac is located in Carlton and Saint Louis counties, 15 miles west of Duluth. The tribal headquarters are in Cloquet. Those at Fond du Lac make up the Lake Superior Band of Minnesota Chippewa. Archaeologists say that present day Chippewa have resided in the Great Lakes region since at least 800 AD, though oral traditions do speak of a westward migration from the east.

There are generally four periods utilized to define the scape of Chippewa generations: pre-contact, and then contact with the French, English, and the United States settlers. Most notable in regards to the ways in which the land is modernly distributed are the English and United States periods of contact. The English degraded the native ways of life, and relations only worsened when the United States defeated the English and opened westward migration. As settlers came from the east they brought with them their ambition to ceaselessly log forests and create farming communities; a string of treaties were signed which made the traditional ways of the Chippewa impossible, such as hunting and gathering. Chippewa rights to the land were eroded and ignored.

In the LaPointe Treaty of 1854, the Chippewa ceded a quarter of the land they inhabited in Minnesota and Wisconsin, plus all of the land on the Upper Peninsula of Michigan, and finally established the 100,000 acres of land now comprising the Fond du Lac Reservation. 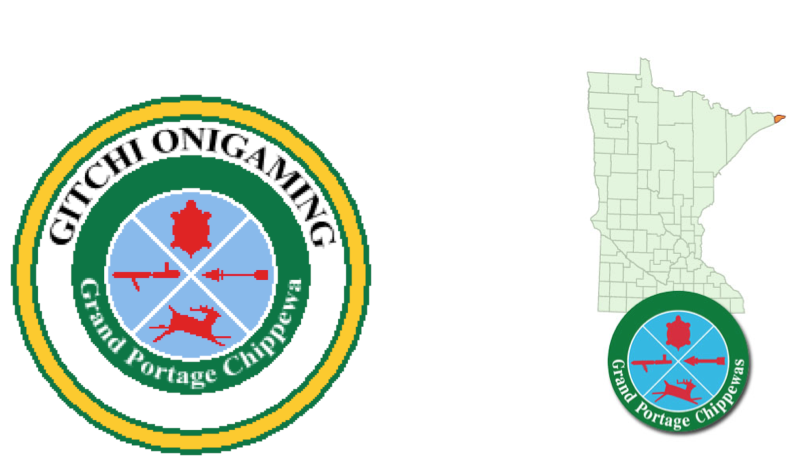 Located in Cook county, Grand Portage is in the extreme northeast corner of Minnesota. The reservation extends about 18 miles along the shores of Lake Superior. The namesake of this reservation comes from the nine-mile portage necessary to bypass the waters of the Pigeon River to make it inland. The French, and then the British utilized this area in the fur trade throughout the 18th century.

Today, Ojibwe on Grand Portage remain close with those straddling the United States and Canada border, as it often splits extended families. The population of Grand Portage has been notoriously small, in 1824 only 60 people were reported. They were originally members of the Lake Superior Band, but were not participants in the early Ojibwe treaties with the US. In 1854, they ceded their lands in the Arrowhead region of Minnesota and accepted Grand Portage as their new home. The tribe established a Land Use Ordinance in 1996 that protects and sets aside certain lands on the reservation. 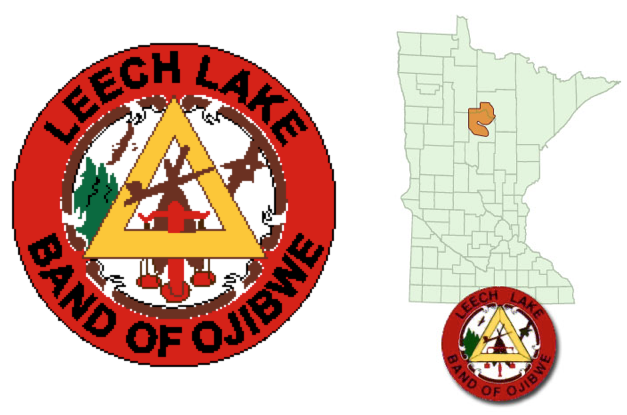 Made up of 11 different communities, Leech Lake is in north central Minnesota, and its tribal headquarters are in Cass Lake. Originally a place where Dakota’s had settled, the Ojibwe bands moved into the region during the later 18th century. In 1847 and 1855, treaties were signed that formed the lay of the land, requiring ceded land, but in 1864 a treaty was expanded and the reservation was consolidated into the area of the three lakes. At the time the intent was to have all American Indians from the scattered reservations around the state to move onto Leech Lake, but later the plans had changed to make that intent reserved for White Earth.

The headwaters of the Mississippi drain here, making it a fairly swampy area, and it has the largest natural wild rice production of any of the State’s reservations. Seventy-five percent of the Chippewa National Forest is housed on the reservation, and other governments actually own a large portion of the land, leaving the Leech Lake Tribe holding the smallest percentage of land on the reservation, and the tribe owning the smallest portion of their land of any in Minnesota.

Located in central eastern Minnesota, the tribal members of Mille Lacs find special significance in the land which comprises their reservation, as they’ve been there for over two centuries. However, when white settlers began encroaching, there was pressure for Mille Lacs residents to leave and relocate to White Earth. Some members refused to leave, and by the early twentieth century these American Indians became federally known as the Non-Removal Mille Lacs Chippewa Band. The reservation itself was established by a treaty in 1855.

Located in northern Minnesota, the land is comprised of many different types of ecology. The Red lake Band has been at this location since the Dakota moved out in the 1700s. Red Lake ceded millions of acres of land but never complied with allotment and never ceded the diminished territory (636,954 acres). All land here is held in common by all members of the band. Due to the fierce perseverance to stick to tradition when allotment began, and because they have never participated in allotment, Red Lake has preserved a lot of heritage and culture that would have otherwise been lost. Ojibwe is widely spoken here, or at least understood, and to many middle-aged and older English was a second language. Red Lake has often been a vanguard of projects and initiatives within Indian Country. 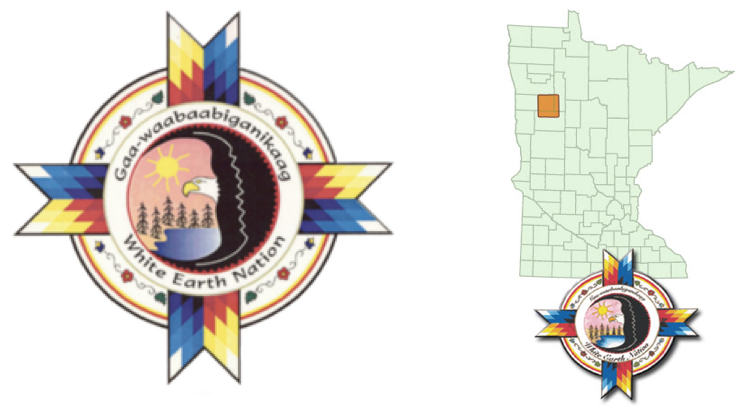 In northwestern Minnesota White Earth contains 829,440 acres of land. White Earth is named for the layers of white clay beneath the surface in the western portion of the reservation. White Earth was never an aboriginal home to any Ojibwe groups, it became a reservation in 1867 in a treaty with the Mississippi Band of Ojibwe. The intention for White Earth was to become home to all Ojibwe and Sioux tribes within the state, but not all bands wanted to relocate; although for those who did come, different bands tended to settle in different areas of the reservation. When several different legislative measures arose surrounding allotment. There were schemes to defraud people of their land, and land was illegally taken from American Indians through dubious sales. Today, there are efforts in place to help hold those who took land accountable. 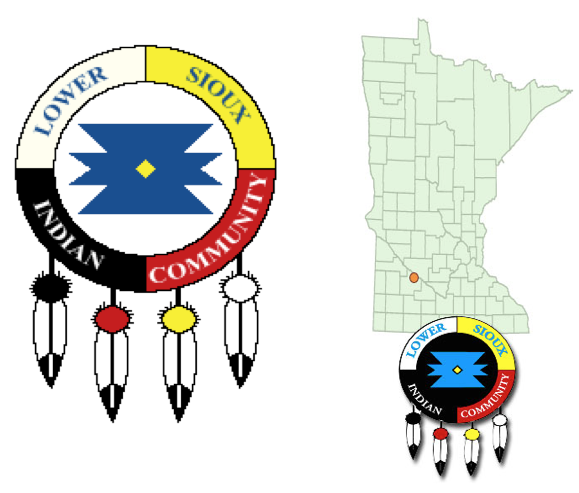 The Lower Sioux Community is to the south of the Minnesota River in Redwood County.

Minnesota, known as the place where water reflects the sky, is the place of Dakota origin. Since before recorded time in this area the Dakota have thrived. In 1862, some traditionalists from the four bands of the Dakota waged war against the United States because of unfulfilled treaty obligations including land payments and healthcare. After the United States defeated the bands, they punished the Dakota by officially severing the treaties with them, voiding all annuities, and then removing all Dakota from Minnesota. Because some members of the bands were loyal to the United States, they were allowed to stay on the lands previously promised to them. Some who were exiled came back despite their removal.

The State exercises criminal jurisdiction over the community, and the community receives some funding from leasing a gravel pit on their lands. In the 1990s some more service industry jobs popped up. 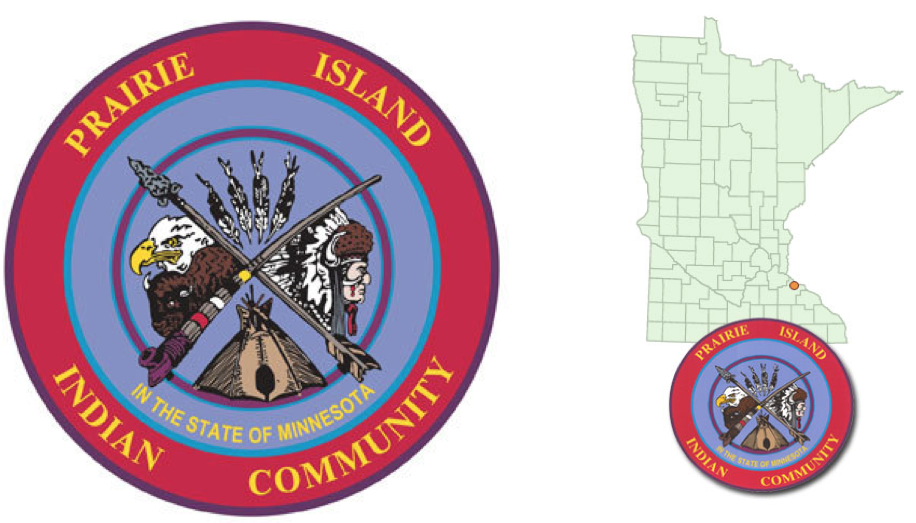 Located on an island in the Mississippi River just 30 miles southeast of Saint Paul, the Prairie Island Indian Community is home to the Mdewakanton (“those who were born of the waters”) and has been for countless generations.

In an 1851 treaty the band ceded much territory, and then the reservation was subject to allotment in 1858, leading to starvation. In 1862, the Dakota conflict was sparked by white settlers not respecting the annuity payments owed to Dakotas for their lost land.

In 1938, the Army Corps of Engineers built a dam which flooded the reservation—including burial grounds—leaving them with only 300 livable acres. In 1973, Xcel Energy began operating a nuclear generating plant on the Island; Xcel also stores spent nuclear fuel in storage containers only three blocks from the community.

What happened in Shakopee echoes previous statements about Dakota communities being banished from their homelands for attempting to stand up for their rights secured under treaties. In 1969, Shakopee was finally given federal recognition and began attempting to construct governmental and economic structures for themselves.

The Upper Sioux Community is located on the Minnesota River in Yellow Medicine County. The Dakota Oyate have resided here for thousands of years. In 1938, 746 acres of land was returned to the Dakota Oyate, and this brought the Upper Sioux Indian Community into existence. The Upper Sioux have struggled with poverty and joblessness just like many other Indian communities, and followed suit in the late 1980s when other Nations began to build casinos. The opening of Firefly Casino has helped the Upper Sioux begin to establish and exercise more tribal sovereignty.