This spring marks the retirement of four professors at Metropolitan State University.  The retirements of Professors David Bouchard, Roger Israel, David Means, and Wy Spano will be commemorated at a celebration hosted from 3 to 5 p.m., Monday, April 17 in the Founders Hall reception area, Saint Paul Campus. 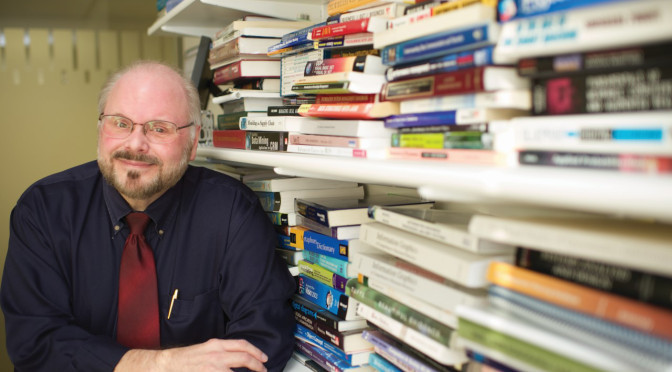 In his 31 years of distinguished service, David Bouchard has always gravitated toward development and innovation. His work in developing graduate education, integrating technological and pedagogical innovations into practice, and pioneering online delivery of education leaves a legacy that will be shown for many years of graduates to come.

Coming to Metropolitan State University from private information technology consulting and directing support services at the University of Minnesota, Bouchard intended to help develop the first graduate program in Management Information Systems (MIS) and return to the private sector. After having the opportunity to work with Metropolitan State’s extraordinary students, however, he stayed, constantly working to create and develop programs at the confluence of management and technology. He is credited with the development of the highly successful MBA and MMIS (Masters of Management Information Systems) master’s programs, seven graduate certificate programs and more than 40 successful graduate courses. He was also instrumental in enabling Metropolitan State to offer Bachelor of Science programs, designed the model for creating graduate certificate programs and served on the team that designed the Doctor of Business Administration program.

Through all of this, however, teaching remained a priority for Bouchard. In addition to receiving Metropolitan State’s Teaching Excellence Award in 2010, he was also named one of four all-time favorite faculty in an alumni poll conducted in 2014. He also holds the distinction of having taught every student who has enrolled in the Doctor of Business Administration program to date.

In addition to has program development and teaching, Bouchard was quite active in faculty governance, serving two terms as faculty association president, chairing or participating in five state committees, serving on numerous university committees, and sitting on the state faculty board of directors for many years. Bouchard’s interests did not, of course, stop at the boundaries of Metropolitan State, and his years of community service include volunteering as a planning commissioner, working with the Salvation Army, and extensive work with his first philanthropic love, the Animal Humane Society, where he has served and contributed for over 30 years. He designed, wrote and contributed the first server-based “pet lost and found” system in the U.S. (helping lost pets get back to their homes) that later became the national standard (for which he won several awards), developed one of the first humane society operations automation systems and much more.

In retirement, Bouchard plans to continue and build on this work with the Humane Society, work on music and art, including photography, and continue to serve in his volunteer city work. As he said, “retirement will not be an ending, it will be a turning of the page and a chance to take many years of learning in new directions. I will always be grateful to Metropolitan State and its students for allowing me to develop so many exciting programs, and touch so many lives.” 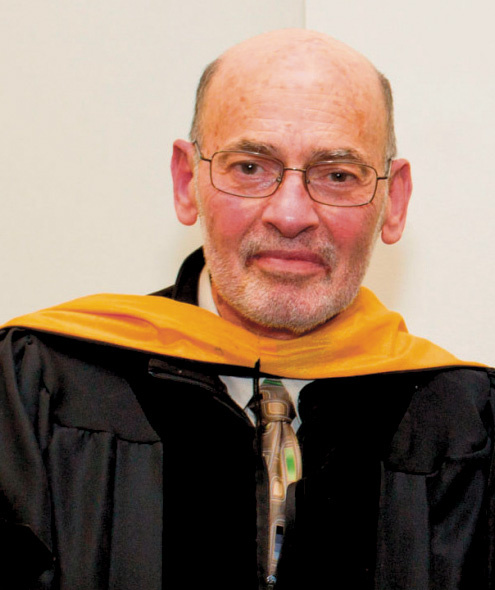 Two words sum up Roger Israel’s impact at Metropolitan State University: love and respect. Love and respect for students, for his colleagues, and for the public good. In 17 years of service to the university, Israel’s care for students extended from their individual hopes and dreams to the meticulous care he took in designing curriculum to meet their needs as people and future professionals. His concern for his colleagues was reflected in his repeated elections to convene the university Inter Faculty Organization. His devotion to the public good stemmed from his abiding respect for each fellow citizen as both constituent and creator of that public.

Israel prepared for his time at Metropolitan State with a bachelor’s in political science and master’s in public affairs from the University of Minnesota, a master’s in city and regional planning from the University of North Carolina at Chapel Hill, and, 20 years after that, a doctorate of public administration from the University of Southern California. These programs were put to use in the public sector for years, as Israel served the city government of Minneapolis, the state government of Minnesota, and the Twin Cities Metropolitan Council for more than 25 years. His success in the public sector is a testament to his talent, hard work, and dedication to public service and the public good, and came in handy when he shifted his focus to higher education. Before coming to Metropolitan State, Israel was a faculty member at Hamline University’s Graduate School of Public Administration and Management for nine years.

During his time at Metropolitan State, Israel took over a fledgling Master of Public and Nonprofit Administration (MPNA) program that admitted about 20 new students per year and doubled the admission rate and expanding the program to the point that it is financially sustainable. This 2016–2017 academic year, with Israel back as MPNA co-director, it is poised to admit more than 50 new graduate students. This growth and sustainability is in large part due to Roger’s vision, leadership, and dedication to standards. In his words, “We gain people, not lose people, by sticking to our standards.”

Israel’s dedication has not gone unrecognized here at the university: he received the Outstanding Advisor Award in 2003, the Civic Engagement Award in 2004, and finally, the Program Builder Award in 2010. These awards are only landmarks along a path lined in total with that love and respect. 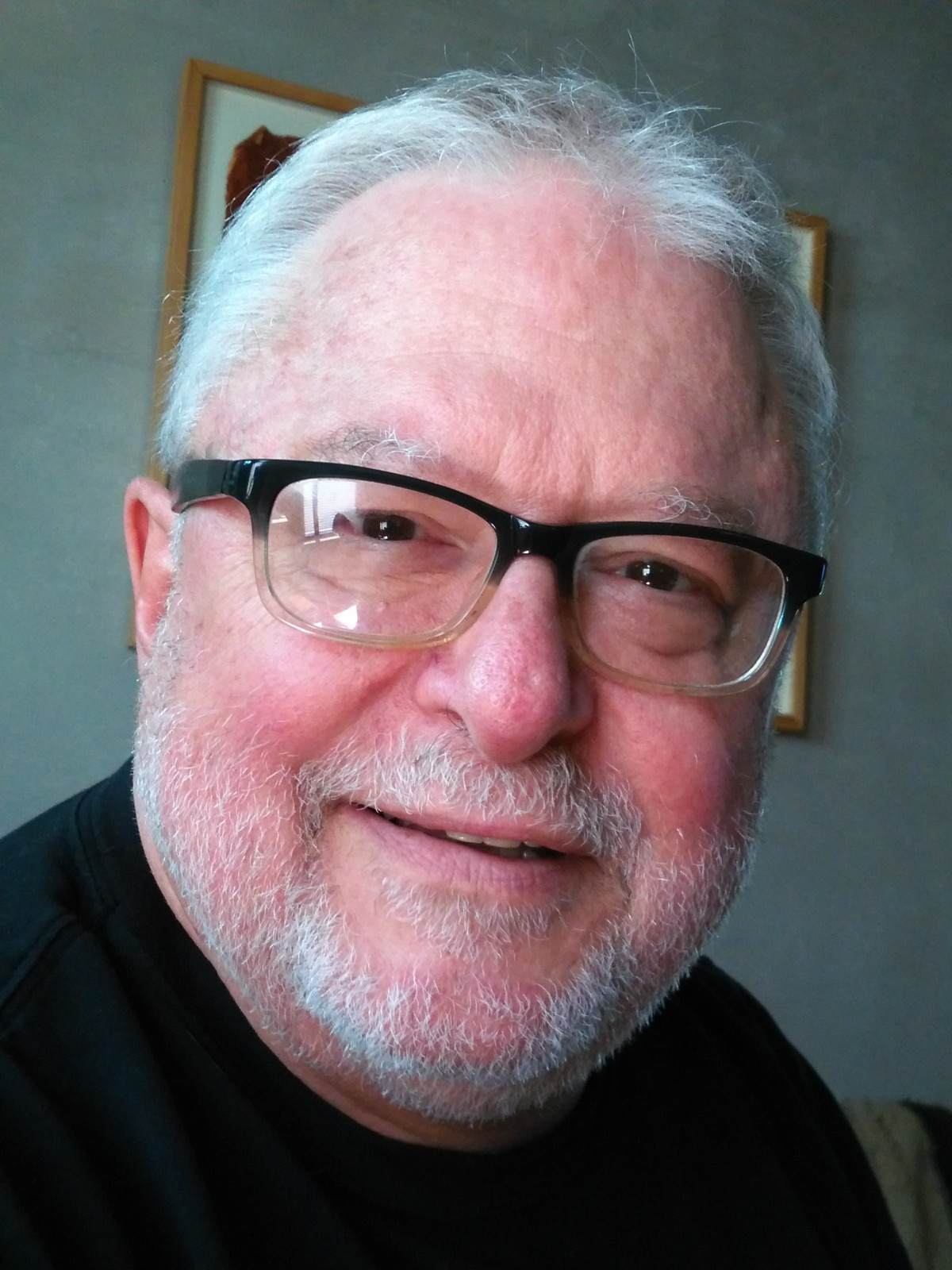 As our first coordinator of Visual and Performing Arts in 1982, he designed and implemented a comprehensive arts curriculum in dance, experimental music, performance art, intermedia art, visual art, theater, multi-media art, and all other fragmented permutations of art. Means produced our first Homecoming Arts Festival in 1984; was awarded two Bush Fellowships for arts curriculum development; organized our Cultural Arts Festival in 1986; was co-chair and chair of our Arts and Science Center 1990–92; then was the first Coordinator of Visual and Performing Arts in the Media and Fine Arts Department.

Means’ Strange Attractors Festival of experimental music and intermedia art has brought national and international artists, composers, and musicians to campus to perform and collaborate with students since 1998. Additionally, Means is a renowned artist with an international reputation and unparalleled standing in his community, with installations and live musical performances exhibited throughout the United States and Europe. He has composed more than 300 musical pieces and performed live in more than 10 countries. The fellowships, grants, and commissions in support of his work include a Bush Foundation Artist Fellowship, Minnesota State Arts Board Grants, and Jerome Foundation-American Composers Forum Commission. He has also been a five-time recipient of a McKnight Composer Fellowship. He brings all his art experience into the classroom, shares his knowledge with students, and serves as a professional role model. His status and success in the local and the international scene bring prestige and honor to Metropolitan State University.

It’s not a major, or a building, or a facility, or anything concrete that represents Means’ most valued contribution to this university. It is his dedication to his art and to his students. He is an inspiration, a pioneer, an artist/teacher, and has shaped the very identity of the arts today at Metropolitan State University. 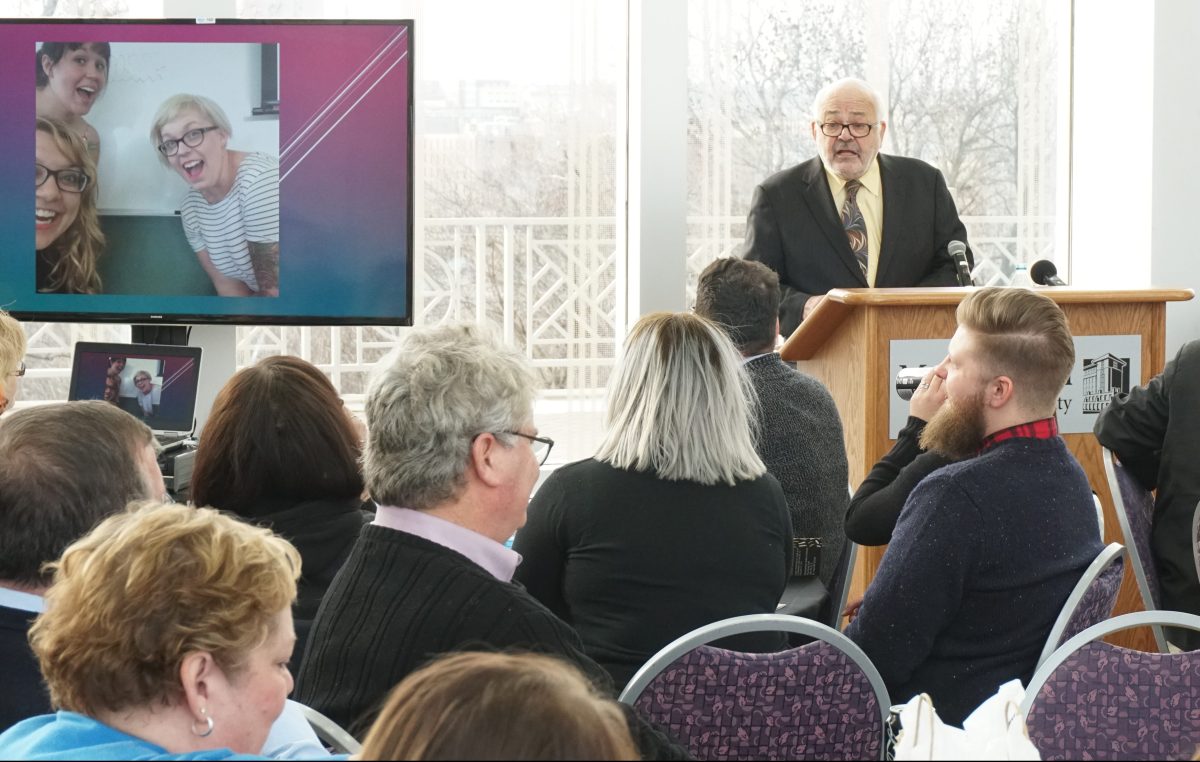 Professor Wy Spano speaks at a ceremony for Metropolitan State’s first cohort to graduate from the Master of Advocacy and Leadership program, Dec. 10, 2016. Spano has directed the program since its inception in 2006 and is retiring.

Spano founded the MAPL program in 2003. In addition to  classroom learning, the program emphasizes practicum and focuses on leadership and advocacy in three areas: the public sector, non-profits, and labor organization. MAPL courses are designed to help students learn how to ethically influence public policy. The program was first taught at the University of Minnesota – Duluth and moved to Metropolitan State in 2015.